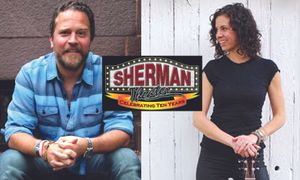 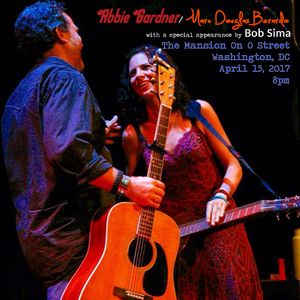 Abbie Gardner/ Marc Douglas Berardo at The Mansion On O Street, Washington, DC
with a special appearance by Bob Sima!

The O Street Museum Foundation promotes and embraces life, from every culture, resulting in a wide-ranging collection of paintings, photographs, sculpture, books, artifacts, and music, from all over the globe.

The only museum of its kind, the O Street Museum has always been dedicated to exploring the creative process. The collection rotates and changes daily. From the art, to the music, to the surroundings, no visit is ever the same. From artist's letters, to animation stills, to written manuscripts, to one of the largest "raw and exposed" music collections, our galleries are not limited to one genre.
---------------------------------------------

About Abbie Gardner:
Abbie Gardner, the fiery Dobro player with an infectious smile has been touring with Americana darlings Red Molly for the past eleven years. After gracing stages from Denver to Denmark, from Australia to Austin, the band decided to take an indefinite hiatus in 2015, so Abbie is striking out on her own!
Abbie has been recognized as an award-winning songwriter, with such accolades as; 2006 Rocky Mountain Folks Festival Songwriter Showcase (2nd place), 2008 Lennon Award Winner (folk) for "The Mind of a Soldier" and 2008 American Songwriter Magazine Grand Prize Lyric Winner for "I'd Rather Be." "The Mind of a Soldier" was also featured on Lufthansa Airlines in 2010. Abbie has had the honor of being part of the songwriting faculty at the 2010 and 2011 Swannanoa Gatherings and assisting at Reso Summit, Nashville's Resonator Conference, for the past several years. She wrote and released a song per week for a year as part of the 2013 Real Women Real Songs project and is excited to tour as a solo act in 2016..
------------------------------------------------------------------
http://www.abbiegardner.com/index/
http://www.abbiegardner.com/listen/
----------------------------------------------------------------
About Marc Douglas Berardo
Rhode Island based Marc Douglas Berardo is a hardworking, fast moving, adventure seeking, keen observer who lives for the story and the song. He has been nationally recognized for his music and performances (Rocky Mountain Folks Fest Song contest, Telluride Troubadour Contest, Sisters Folk Festival, South Florida Folk Fest, 2013 Rams Head Onstage Rammie for Show of the Year.) No Depression Magazine called his latest CD Whalebone: “a highly polished personal collection with songs that are on the delicate trapeze of poignancy.” In May of 2014, Berardo won the 2014 Wildflower Art and Music Festival Song Contest in Texas. The following week he performed as a finalist in the legendary Kerrville New Folk Contest at the Kerrville Folk Festival. In early 2015, Berardo's interview and live performance feature on Sirius/ XM Satellite Radio's The Village was voted one of the best of the year by listeners. Marc Douglas Berardo has shared the stage with heavyweights such as The New Riders of The Purple Sage, The Doobie Brothers, Jimmy LaFave, Martin Sexton, Terri Hendrix, Kevin Welch,Red Molly, The Pousette Dart Band, John Haitt, and Livingston Taylor.
------------------------------------------------
web sites:
http://marcdouglas.com/
https://en.wikipedia.org/wiki/Marc_Douglas_Berardo
https://www.facebook.com/MDBMusicpage/
http://www.pandora.com/station/play/1841991029694784322
https://marcdouglasberardo.bandcamp.com/