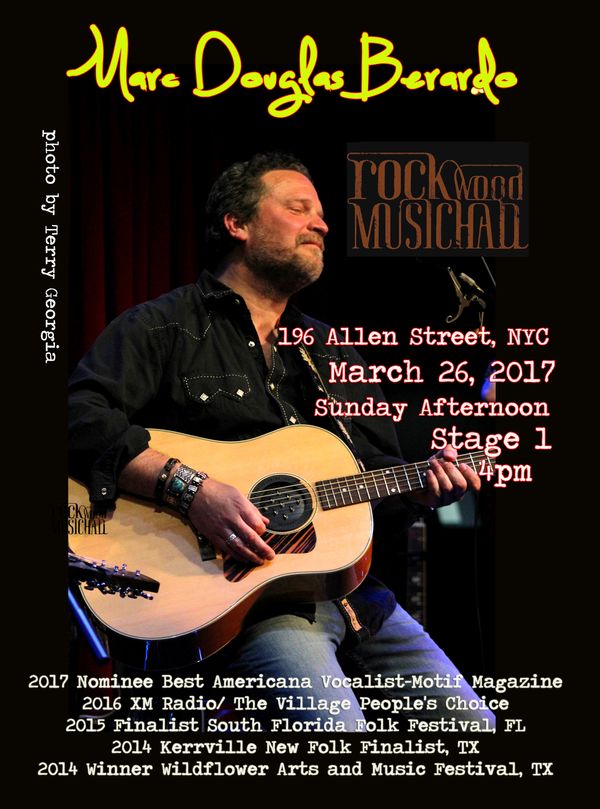 Rhode Island based Marc Douglas Berardo is a hardworking, fast moving, adventure seeking, keen observer who lives for the story and the song. He has been nationally recognized for his music and performances (Rocky Mountain Folks Fest Song contest, Telluride Troubadour Contest, Sisters Folk Festival, South Florida Folk Fest, 2013 Rams Head Onstage Rammie for Show of the Year.) No Depression Magazine called his latest CD Whalebone: “a highly polished personal collection with songs that are on the delicate trapeze of poignancy.” In May of 2014, Berardo won the 2014 Wildflower Art and Music Festival Song Contest in Texas. The following week he performed as a finalist in the legendary Kerrville New Folk Contest at the Kerrville Folk Festival. In early 2015, Berardo's interview and live performance feature on Sirius/ XM Satellite Radio's The Village was voted one of the best of the year by listeners. Marc Douglas Berardo has shared the stage with heavyweights such as
The New Riders of The Purple Sage, The Doobie Brothers, Jimmy LaFave, Martin Sexton, Terri Hendrix, Kevin Welch,Red Molly, The Pousette Dart Band, John Haitt, and Livingston Taylor.
----------