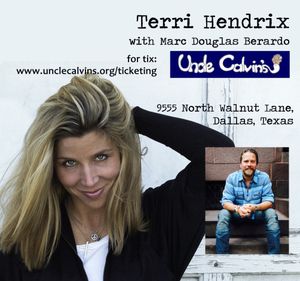 ($18/$22) - When three different labels turned down that first record of hers 20 years ago, the Texas trailblazer forged ahead by self-releasing it on her own. This was still long before the practice of artists putting records out on their own labels became an accepted industry-wide trend, but Terri’s little DIY experiment did so well for her that by the time she was ready to release her second album, 1998’s “Wilory Farm,” she was going-her-own-way not by necessity but by proud — and profitable — choice. Two decades on, all three of those labels that turned her down are long out of business. But Terri Hendrix and her San Marcos, Texas-based Wilory Records are still going strong. As music legend Al Kooper once noted in a glowing review of her 2010 song “Slow Down,” “Terri is truly a self-made woman … She makes me jealous.” As always, Terri will be joined on stage tonight with her longtime musical partner, Lloyd Maines!